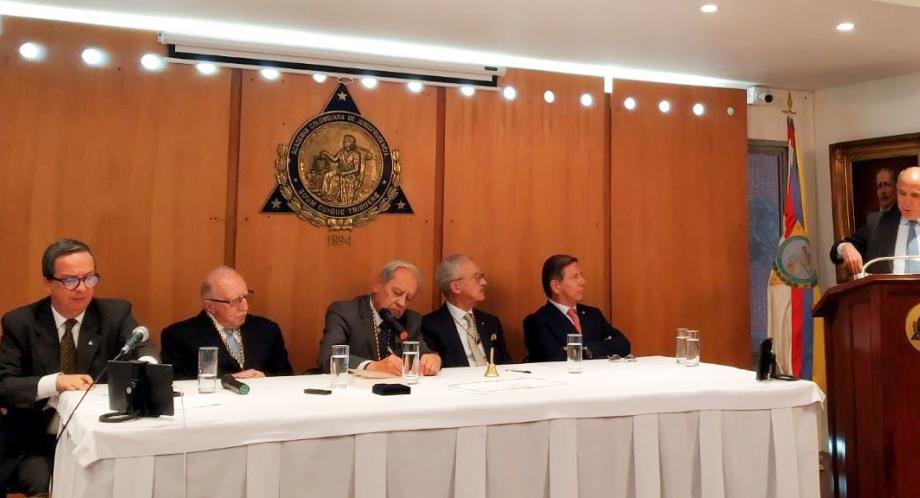 In the incorporation speech read by Prof. Carlos Jaramillo, he mentioned that Lorenzetti is already a member of the Academies of Law of Argentina, Peru and now Colombia, besides participating in various legal institutes in the United States, Brazil, Mexico, Italy, Spain and other countries, with books published in more than ten countries in America and Europe. Members of the Academy, the Constitutional Court, the Supreme Court, the Council of State and the main jurists of Colombia were present. He also participated in several conferences at the Universidad Externado and in a Congress on "Judicial Protection in Latin America: Actions to guarantee fundamental rights during the Covid-19 pandemic", organized by the Universidad Externado de Colombia, where he discussed the Covid-19 Litigation Database Project, together with Italian professors from the University of Trento.

Lorenzetti pointed out that the region's judiciaries face challenges that were unimaginable fifty years ago. They must resolve issues of social, economic and political importance. For this reason they are strongly attacked with proposals for reforms of all kinds.

Faced with the magnitude of the challenges, it must always be kept in mind that the function of the judiciary is to protect the rights of citizens and not themselves. Lorenzetti pointed out that judges must assume a statesmanlike position, in the sense of protecting the fundamental values of the rule of law.

The idea that the judiciary should refrain from decisions that have an impact on society, or from not interpreting the law according to the current needs of the population, is typical of the 19th century. At that time, it was the legislator who dictated great systems and the judiciary only applied them.

But that conception changed completely in a system with multiplicity of sources, because there are international treaties, Constitutions, laws, jurisprudence, and judges must interpret them in the case. This attitude is often criticized as "creative" or "activist", but most of the rights are in the constitutions and laws; they just have to be applied with institutional courage.
Lorenzetti developed these ideas which are published in his book on "judicial decision" published in Colombia and several countries. The jurisprudence of the Argentine Supreme Court has been widely cited in fields such as human rights, trials against humanity, protection of the vulnerable, of property, of the environment. In all these cases it is a jurisprudence that interprets the constitutions in accordance with the current times.

The current pluralist society entrusts the constitution with the task of realizing the condition of possibility of life in common, and abandoning the task of establishing a determined life project imposed from the power to the citizens. The goal to be achieved is a more inclusive society, trying to overcome the friend-enemy dialectic.